All other countries
by Shigeru Aoyagi, Chief Portfolio Manager
24 March, 2021

In February 2021, Japan’s Nikkei Stock Average reached JPY 30,000 for the first time in over three decades. We believe that equities will keep rising, and that amid this shift in the broader market Japanese value stocks are on the cusp of a long-awaited turnaround.

Factors that drove the Nikkei above 30,000

The impressive rise by Japanese equities over the past several months has been driven in part by factors that have boosted global markets, such as strong fiscal and monetary policy support and hopes that the roll-out of vaccines will enable economies to recover from the COVID-19 pandemic. At the same time, we believe that the surge in Japanese equities—the Nikkei is back at levels last seen during the heady days of the bubble era three decades ago—is also being fuelled by investors reassessing the intrinsic value of Japanese equities in the wake of the pandemic.

How Japan has coped with the pandemic provides investors a good opportunity to reassess its equity market. The country, without strict lockdown measures, has kept its COVID-19 infection rates low compared to its developed market peers. Such a display of social stability during a global crisis has prompted investors to reassess Japan and its perceived political risks, in our view.

Another recent development that deserves attention is Japan’s market reform efforts. A prime example is the realignment of the Tokyo Stock Exchange (TSE), with its five sections being reorganised into three in 2022. The listing requirements regarding tradable shares and market cap will become more stringent, and approximately a third of the companies currently listed on the TSE’s first section run the risk of being excluded from the top “Prime” section following realignment. In order to meet the new requirements and remain listed, companies are expected to unwind cross shareholdings. The realignment should therefore provide an incentive for companies to improve their corporate governance practices, which in turn will enhance shareholder value.

Lastly, the pandemic displayed the ability of Japanese companies to manage risk in the face of an unexpected, global black-swan event. Manufacturers quickly altering their production lines to produce masks and medical supplies, major technology firms adopting work-from-home arrangements for a majority of their employees early in the pandemic and firms quickly addressing cost structure to combat a declining top line are but a few examples.

Comparing the bubble era and the present

Compared to 1988, when the Nikkei first rose above 30,000, the market environment in 2021 has changed significantly. In 1988 the Japanese economy was in the middle of an historic bubble era and the Nikkei 225’s P/E ratio was at a lofty 63x due to excess liquidity and amid a proliferation of cross shareholdings. But presently, its P/E ratio is at a relatively healthy level of 19x (Chart 1). 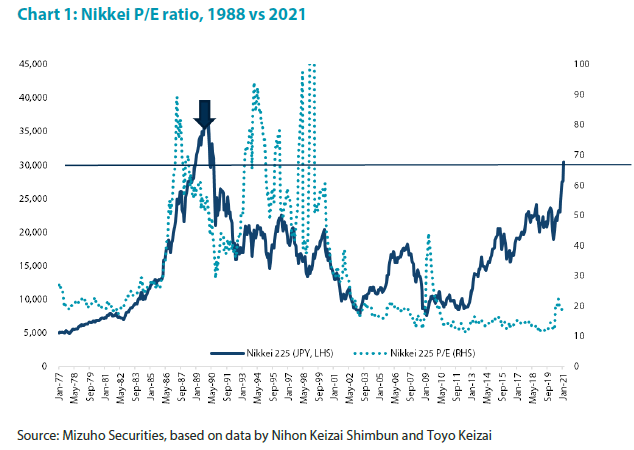 Other metrics illustrate how the market environment has changed over the past three decades. In 1988, the Nikkei’s P/B ratio was at 5.0x, suggesting that many of the companies were overvalued at the time, while the ratio is now at 1.4x (Chart 2).

The dividend yield also highlights how shareholders’ expectations have changed significantly over the past 30 years. The Nikkei’s dividend yield in1988 was a modest 0.46%, as companies did not place much importance on the metric at the time. It has since risen to 2.10% (Chart 3). More importantly, the country’s high level of cross shareholdings—long associated with corporate complacency and lax governance—has declined sharply since the 1990s, when it was at its peak.

The Japanese market therefore appears to be in a much healthier state compared to where it was during the bubble era. As such, we believe that Japanese equities are now on the cusp of a full-scale comeback, with the Nikkei poised to rise significantly above 30,000. The Japanese economy has also matured in the last 30 years. Along with the recent rise in long-term interest rates, this presents an opportunity for value style investments.

Historically, value investing in Japan has been more effective than other styles such as growth (Chart 4). However, growth investing has captured much of the spotlight in Japan over the past decade, thanks to factors such as slow economic growth, low interest rates due to unprecedented monetary easing and the development of new technologies which favoured technology stocks. Value, in contrast, was persistently on the back foot during this period, exposed to particularly strong headwinds over the last few years. 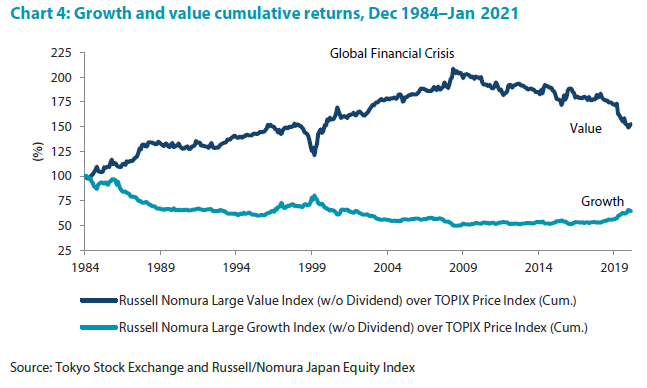 However, we believe that a turnaround for the value style is underway, with the surge in long-term interest rates being the main trigger and a shift from growth to value ensuing (Chart 5). 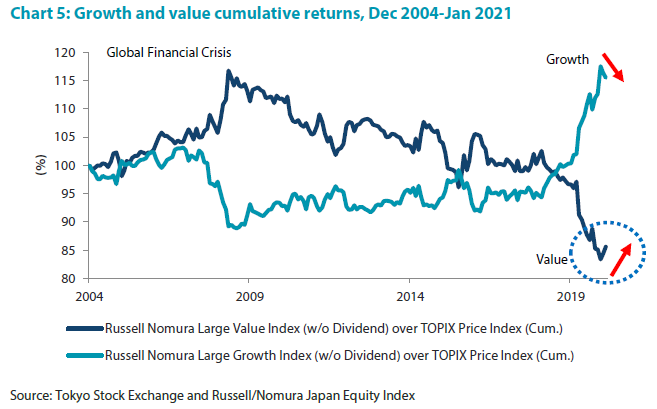 Value stocks are typically cyclical, and we believe that cyclical stocks have ample upside room due to the following factors:

In addition, secular, structural changes unfolding in Japan are expected to benefit the value style over the longer term. Japan’s market reform efforts, notably the aforementioned realignment of the TSE, could unlock previously overlooked opportunities in value by accelerating improvements in corporate governance. The significant decline in cross-shareholdings over the years reflects the relational shift between companies and shareholders. Japan’s attempt to pivot towards hydrogen as it aims to become carbon-neutral by 2050 is also expected to serve as a catalyst for structural change. Japanese companies within the value sphere have an abundance of advanced technology related to hydrogen energy, including those linked to automobiles and energy infrastructure, and they stand to benefit when economic conditions begin improving.

The rapid rise in long-term interest rates which began at the start of 2021, while being conducive to value investments, could trigger some short-term corrections in the broader equity market. However, we believe that the long-awaited turnaround in Japanese equities has just started and any corrections will provide an entry point into the market; as such, the 30,000 mark is likely to become one of several milestones marking the Nikkei’s advance. The Japanese equity market is in a much healthier state compared to 30 years ago and enjoys a greater degree of stability. Moreover, the rebound in long-overlooked value stocks has also just begun with the cycle at the start of its value-supportive phase. The country also offers a number of catalysts that will drive structural change, such as continued improvement in corporate governance and its pivot towards hydrogen.