All other countries
by Naoki Kamiyama, Chief Strategist
07 October, 2021

On 4 October Fumio Kishida took office as Japan’s 100th prime minister after winning the ruling Liberal Democratic Party leadership race the previous week. Kishida has a busy schedule ahead of him as the beginning of his tenure coincides with an end to the current four-year term for the members of the House of Representatives, the lower house of Japan’s parliament. With the four-year term ending, a general election needs to be held no later than the end of November. Kishida announced that he will dissolve the lower house on 14 October, with the general election to be held on 31 October. The election will be an immediate test for the new prime minister and a chance for the market to gauge the strength of the ruling LDP-led coalition, which suffered a drop in public support under previous prime minister Yoshihide Suga.

Specifically, the market will focus on how many of the 465 lower house seats the LDP and its coalition partner Komeito can win. Before looking ahead to Kishida’s new policies, the market wants to see whether he has the support and strength to follow through with his agenda. Japan has had a number of prime ministers in the past come and go within a short period of time and the market will want to see whether Kishida has a similar fate. The election’s impact on the market will likely depend on the number of seats the ruling coalition wins. A landslide victory could provide a very strong boost to the market, which is chiefly concerned with whether the new prime minister can continue the policies of the previous administrations with minimum interruption. The coalition was expected to lose a significant number of seats in the election had Suga stayed in power, potentially slipping from a two-thirds majority (310 seats) to close to a simple majority (233 seats). But fortunes may improve under Kishida’s leadership and the coalition could retain at least the 261-seat threshold (or an “absolute stable majority”) giving it a majority in each of the 17 standing committees and granting it the committee chairperson posts, permitting the coalition to move legislation through committees in case of a tie vote. Hopes have emerged that the coalition can now retain at least 261 seats, thereby allowing the new administration to stay in power for several years so it can renew some aspects of Abenomics.

From a policy perspective, further improving Japan’s medical capabilities in the wake of the pandemic is the new administration’s immediate task. The country’s vaccination rate steadily increased during the tenure of previous prime minister Suga; further raising the vaccination rate and expanding the ability of the country’s hospitals to take in severely ill coronavirus patients will be keys to accelerating the pace of Japan’s economic recovery. Other focal points are how Kishida approaches corporate governance reform amid some concerns in the market that the reform could lose momentum under his tenure; the new prime minister has also suggested a capital gains tax increase and the market will be watching how he approaches the issue.

What impact could China-related market volatility have on Japan?

Recent China-related developments, such as Evergrande’s debt crisis and regulatory crackdowns on the Chinese education and technology sectors, have been a source of volatility in the broader markets. Some may wonder how much of an impact the volatility from China could have on the Japanese market given the proximity between the two economies. Before our assessment we need to note that regulatory crackdowns happen not just in China but in many other countries, including those of the developed economies. The US, for example, is engaged in anti-monopoly crackdowns. The key difference, however, is that unlike developed economies, China tends to act against listed companies suddenly and swiftly, which creates uncertainty and leads to volatility.

What does such volatility mean for Japan? From a Japanese market perspective, in our view the overall impact is limited and more likely to be indirect rather than direct. This is because Japan does not have particularly strong links to China’s financial system or its domestic real estate and credit markets, thereby limiting the contagion risk to the Japanese financial system. As such, comparisons with the 2008 global financial crisis would not be apt at this stage, as the Japanese financial system had stronger links with those of the US, the epicentre of the crisis 13 years ago.

The Japanese equity market rose in September, with the TOPIX (w/dividends) rising 4.36% on-month and the Nikkei 225 (w/dividends) climbing 5.50%. During the first half of the month, stocks rallied as Prime Minister Suga's resignation announcement spurred hopes that the new administration would bolster economic measures to boost recovery. This was coupled with receding risk aversion following the continued decline of new COVID-19 cases in Japan and steady progress in the country’s vaccination programme, with more than 50% of the population now fully vaccinated. However, the market pulled back later in the month due to worries about the looming impact of the debt crisis at one of China’s property giants on the Chinese economy as a whole. A sell-off in US stocks triggered by growing fears over rising US long-term rates also had a negative impact on the Japanese stock market. Of the 33 Tokyo Stock Exchange sectors, 28 sectors rose, with Mining, Air Transportation, and Insurance posting the strongest gains. In contrast, only five sectors declined, including Iron and Steel, Marine Transportation, and Machinery. 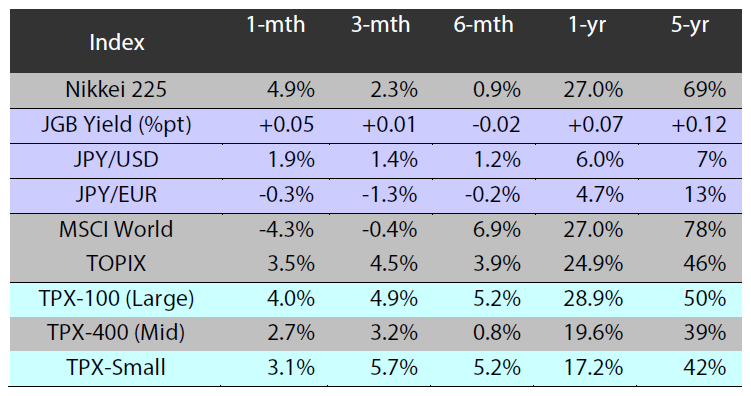 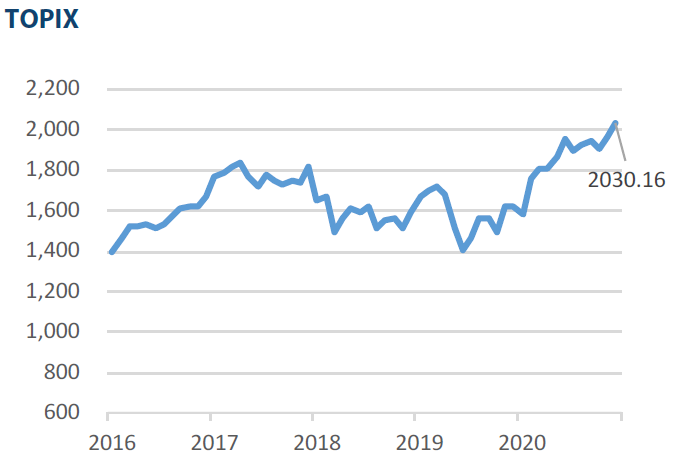 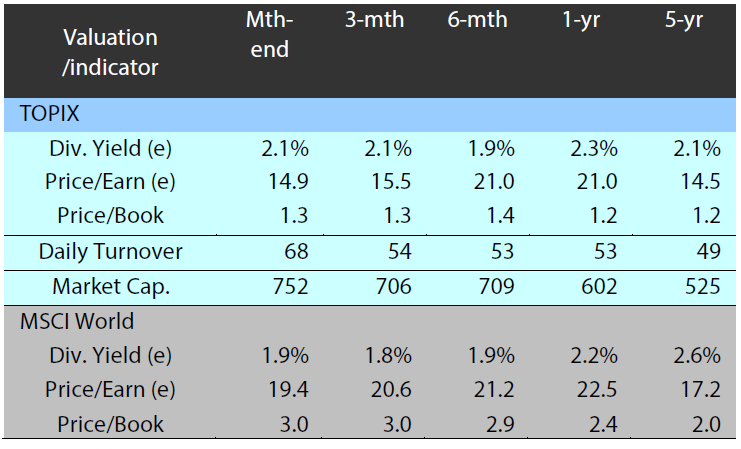 (e) stands for consensus estimates by Bloomberg. Turnover and market cap in JPY trillion. Source: Bloomberg, as at 30 September 2021 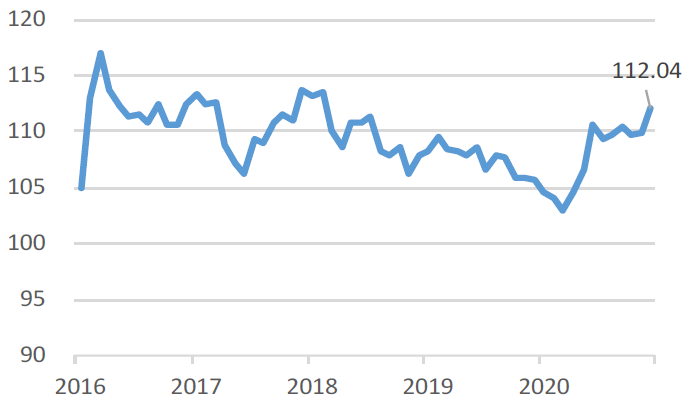