The case for China bonds (Englisch)

Market size second only to the US

Breakdown of the China bond market

Foreign investment in the China bond market has primarily been allocated to offshore markets. Hence, many overseas investors are somewhat familiar with offshore dollar and Dim Sum bonds which have traditionally been easily accessible. However, it is important to note that the offshore market is but a small fraction of China’s overall bond market. Chart 2 illustrates the massive size of the onshore bond market vis-à-vis the offshore bond market, highlighting a world of untapped opportunities for overseas investors. 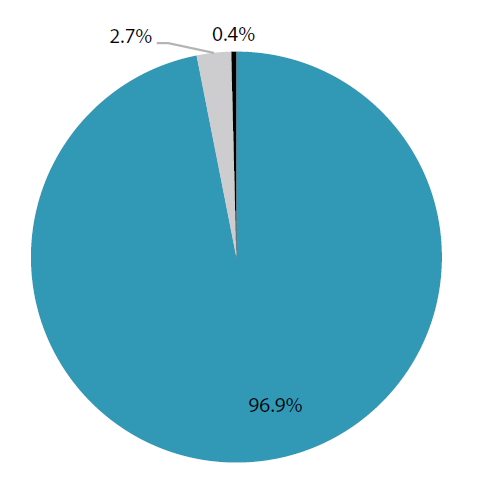 Unfamiliarity with the onshore bonds has resulted in a reluctance from investors to allocate to this part of the market. Onshore bonds are traded via the interbank and exchange bond market and are broadly broken down into three categories.

Rates bonds make up about two thirds of the market and consist of the following:

Around 13% of the China bond market is made up of short-dated instruments issued by financial and non-financial corporates. These include non-convertible debentures, commercial papers and short-term commercial papers and are typically up to one year in tenor. They are generally liquid and provide a small pickup over sovereign bonds which makes them particularly useful for cash management and/or investment by money market funds.

Credit bonds or corporate debt comprise most of the outstanding bonds in the onshore market. Credit bonds can be issued under the following regulatory framework:

CGBs, policy bank bonds and non-convertible debentures issued by national banks are seen as good starting points for investors looking to enter the market. These are highly liquid and are of high credit quality. If slightly lower liquidity is acceptable, bonds of large state-owned corporations provide some pickup in yield. Some of these issuers do have investment grade ratings or have offshore bonds rated by Moody’s/S&P/Fitch.

Opening up of the China onshore market

The onshore bond market has been opening its doors to international investors. Foreign investments into the country were restricted in the past and this has meant that investment in China onshore fixed income has predominantly come from domestic investors. Even just a few years ago, international access to China bonds was only granted to select foreign investors by the Chinese authorities on an approval basis. However, with the authorities increasingly opening up the bond market, foreign investors can now access onshore bonds simply by registering for an access programme, such as the China Interbank Bond Market (CIBM), Bond Connect and Qualified Foreign Institutional Investor (QFII) / Renminbi Qualified Foreign Institutional Investor (RQFII). The easier access is supported by market reforms such as extended trade settlement, flexibility in foreign exchange and extended trading hours which has helped with accessibility.

China bonds are now also included in three major global bond indices (Bloomberg Global Aggregate Index, JP Morgan GBI-EM Index and the FTSE World Government Bond Index) with weights varying between 5 to 10%. Inclusion in the WGBI is a significant development. The WGBI is seen as a developed market bond index and in order for bonds to be included, they need to meet FTSE’s inclusion criteria, such as liquidity requirements, and also achieve a minimum credit quality (A- by S&P and A3 by Moody’s). The inclusion of Chinese bonds into the index lends credibility to this market for global bond investors. It is a significant step in China’s transition towards a mature bond market alongside developed market peers.

This has enabled asset managers to offer a variety of investment solutions including open-ended funds which allow an easy access route to this important market. Foreign investors have therefore materially increased exposure to China onshore bonds, in particular sovereign bonds. Chart 4 shows foreign ownership of China central government bonds and its upward trend. 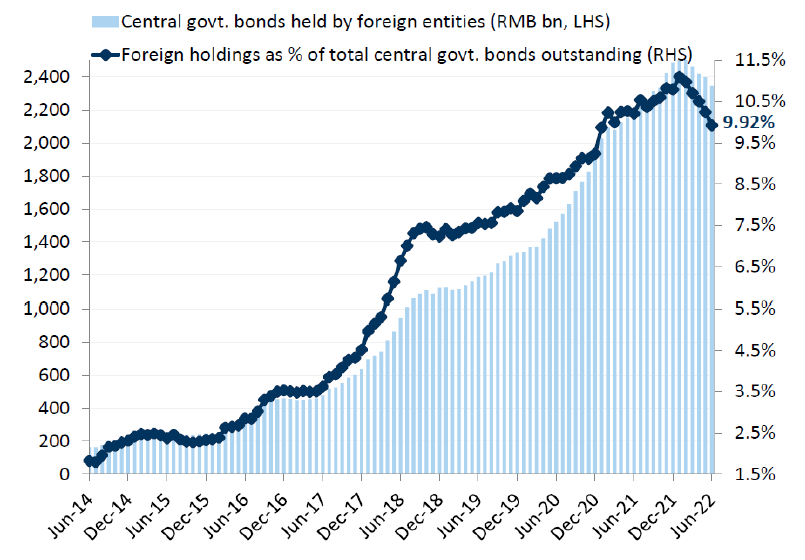 We believe there is plenty of room for further advances and see continued progressive developments in other areas such as the onshore credit market and the opening up of onshore interest rate derivatives. These encouraging advances are expected to further support growth in this asset class.

China bonds have a low correlation to other major bond markets including both developed and emerging. As highlighted in Chart 5, historical correlations with key bond markets have been below 0.25. In our view, this is advantageous for achieving good portfolio diversification. 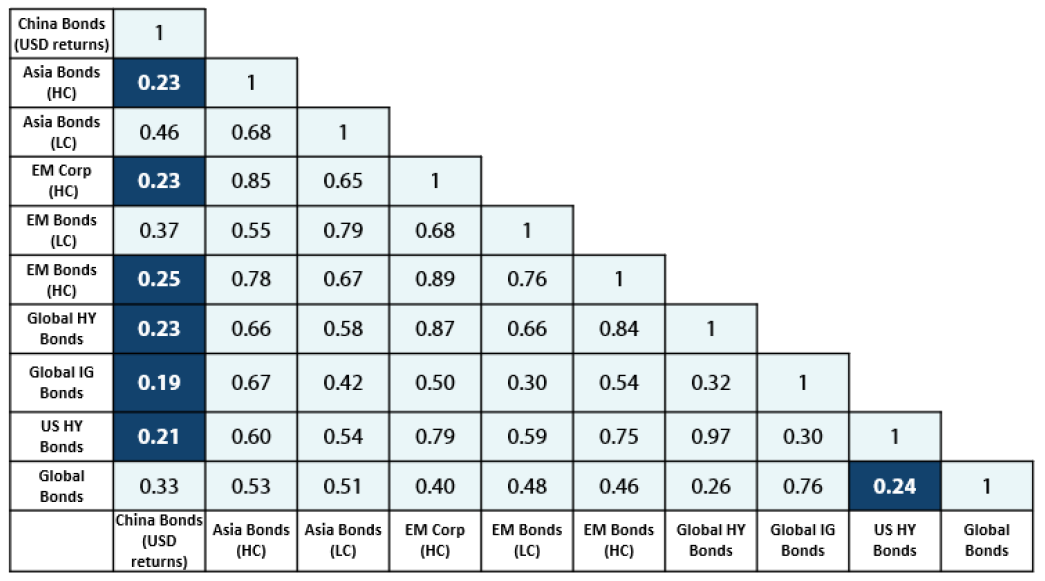 The low correlation reflects the sensitivity of the asset class to Chinese domestic economic and policy cycles rather than those of global markets. China has a large domestic economy and therefore its economic cycles may not always be in sync with the rest of the world.

In March 2020, the spread of COVID-19 resulted in heightened market volatility and created challenging bond market liquidity conditions in which not even the US Treasury market was spared. In comparison, the Chinese onshore fixed income market remained calm. This was because of the low foreign investor participation and consequently, local investors were able to easily absorb selling flows.

Although corelations and diversification benefits may weaken as foreign investor participation increases, it will take time for foreign investors to build up a significant presence. Overseas investors currently own less than 10% of Chinese onshore sovereign bonds and less than 5% of the entire onshore bond market. Therefore, we believe that diversification benefits will remain for the foreseeable future.

Chinese onshore bonds have typically maintained a lower volatility relative to bonds of other countries. Moreover, China’s central bank has significantly improved its liquidity management so volatility has certainly been reduced. Since 2018 there have been few liquidity squeezes on the onshore fixed income market and they have not reached the magnitude of those that occurred in the years before.

The renminbi’s reputation as a major global currency is increasing and this should be beneficial for onshore fixed income. The last decade has seen internationalisation of the currency with rising global usage. China can now settle trade in renminbi with over 100 countries. In addition, 42% of China’s cross border payments and receipts were settled in renminbi in the first nine months of 2022 (Chart 7).

The renminbi is also being held as a reserve currency in more than 70 countries and the trend has been increasing (Chart 8). 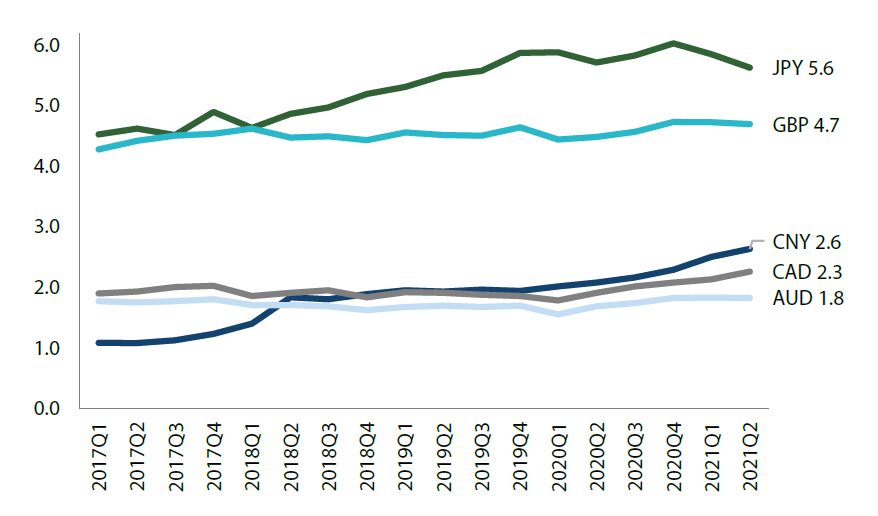 The renminbi has depreciated significantly against the US dollar in 2022, as the US Federal Reserve’s hawkish shift resulted in a dramatic rise in the greenback. China’s balance of payments remain positive, exports are holding up and the country has been posting strong trade surpluses. China is the second largest economy in the world and is a key trading partner for major countries. As such, growth and demand for the currency is unlikely to collapse for the foreseeable future; therefore we believe there is still attractiveness in the renminbi from a long-term perspective.

The People’s Bank of China (PBOC) has the ability to apply various quasi-monetary policy tools including emergency liquidity arrangements to help revive the economy and stimulate the renminbi. We have also seen central banks in Southeast Asia renewing agreements with the PBOC over the last couple of years; this essentially reduces dollar usage in cross-border payments and lessens their reliance and dependence on the dollar. Depreciation risks could be reduced going forward amid expectations that US rate hikes will begin to slow down and with China continuing with its accommodative monetary policy.

Our long-term outlook for China bonds remains positive. We believe that the world’s second largest bond market has plenty of room to grow and ample tailwinds to lead it in this direction. China’s bond market is exhibiting low correlation to other asset classes, displaying historically lower volatility, enjoying continued internationalisation of the renminbi and benefitting from the country being included in globally recognised indices. We therefore believe that the China bond market, which is gaining increased attention worldwide, offers a quality investment opportunity for investors. With the renminbi going through a weak phase, the current market environment could present opportunities for investors with a long-term timeframe. 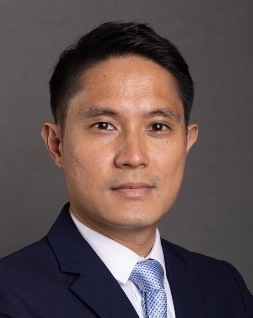